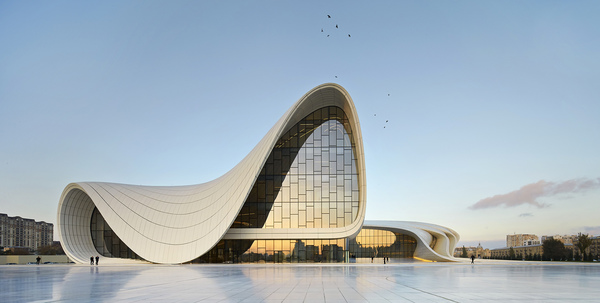 As part of the former Soviet Union, the urbanism and architecture of Baku, the capital of Azerbaijan on the Western coast of the Caspian Sea, was heavily influenced by the planning of that era. Since its independence in 1991, Azerbaijan has invested heavily in modernising and developing Baku’s infrastructure and architecture, departing from its legacy of normative Soviet Modernism.

Zaha Hadid Architects was appointed as design architects of the Heydar Aliyev Center following a competition in 2007. The Center, designed to become the primary building for the nation’s cultural programs, breaks from the rigid and often monumental Soviet architecture that is so prevalent in Baku, aspiring instead to express the sensibilities of Azeri culture and the optimism of a nation that looks to the future.

The design of the Heydar Aliyev Center establishes a continuous, fluid relationship between its surrounding plaza and the building’s interior. The plaza, as the ground surface; accessible to all as part of Baku’s urban fabric, rises to envelop an equally public interior space and define a sequence of event spaces dedicated to the collective celebration of contemporary and traditional Azeri culture. Elaborate formations such as undulations, bifurcations, folds, and inflections modify this plaza surface into an architectural landscape that performs a multitude of functions: welcoming, embracing, and directing visitors through different levels of the interior. With this gesture, the building blurs the conventional differentiation between architectural object and urban landscape, building envelope and urban plaza, figure and ground, interior and exterior.

Fluidity in architecture is not new to this region. In historical Islamic architecture, rows, grids, or sequences of columns flow to infinity like trees in a forest, establishing non-hierarchical space. Continuous calligraphic and ornamental patterns flow from carpets to walls, walls to ceilings, ceilings to domes, establishing seamless relationships and blurring distinctions between architectural elements and the ground they inhabit. Our intention was to relate to that historical understanding of architecture, not through the use of mimicry or a limiting adherence to the iconography of the past, but rather by developing a firmly contemporary interpretation, reflecting a more nuanced understanding.

Responding to the topographic sheer drop that formerly split the site in two, the project introduces a precisely terraced landscape that establishes alternative connections and routes between public plaza, building, and underground parking. This solution avoids additional excavation and landfill, and successfully converts an initial disadvantage of the site into a key design feature.

One of the most critical yet challenging elements of the project was the architectural development of the building’s skin. Our ambition to achieve a surface so continuous that it appears homogenous, required a broad range of different functions, construction logics and technical systems had to be brought together and integrated into the building’s envelope. Advanced computing allowed for the continuous control and communication of these complexities among the numerous project participants.

The Heydar Aliyev Center principally consists of two collaborating systems: a concrete structure combined with a space frame system. In order to achieve large-scale column-free spaces that allow the visitor to experience the fluidity of the interior, vertical structural elements are absorbed by the envelope and curtain wall system. The particular surface geometry fosters unconventional structural solutions, such as the introduction of curved ‘boot columns’ to achieve the inverse peel of the surface from the ground to the West of the building, and the ‘dovetail’ tapering of the cantilever beams that support the building envelope to the East of the site.

The space frame system enabled the construction of a free-form structure and saved significant time throughout the construction process, while the substructure was developed to incorporate a flexible relationship between the rigid grid of the space frame and the free-formed exterior cladding seams. These seams were derived from a process of rationalizing the complex geometry, usage, and aesthetics of the project. Glass Fibre Reinforced Concrete (GFRC) and Glass Fibre Reinforced Polyester (GFRP) were chosen as ideal cladding materials, as they allow for the powerful plasticity of the building’s design while responding to very different functional demands related to a variety of situations: plaza, transitional zones and envelope.

In this architectural composition, if the surface is the music, then the seams between the panels are the rhythm. Numerous studies were carried out on the surface geometry to rationalize the panels while maintaining continuity throughout the building and landscape. The seams promote a greater understanding of the project’s scale. They emphasize the continual transformation and implied motion of its fluid geometry, offering a pragmatic solution to practical construction issues such as manufacturing, handling, transportation and assembly; and answering technical concerns such as accommodating movement due to deflection, external loads, temperature change, seismic activity and wind loading.

To emphasize the continuous relationship between the building’s exterior and interior, the lighting of the Heydar Aliyev Center has been very carefully considered. The lighting design strategy differentiates the day and night reading of the building. During the day, the building’s volume reflects light, constantly altering the Center’s appearance according to the time of day and viewing perspective. The use of semi-reflective glass gives tantalizing glimpses within, arousing curiosity without revealing the fluid trajectory of spaces inside. At night, this character is gradually transformed by means of lighting that washes from the interior onto the exterior surfaces, unfolding the formal composition to reveal its content and maintaining the fluidity between interior and exterior.

As with all of our work, the Heydar Aliyev Center’s design evolved from our investigations and research of the site’s topography and the Center’s role within its broader cultural landscape. By employing these articulate relationships, the design is embedded within this context; unfolding the future cultural possibilities for the nation. 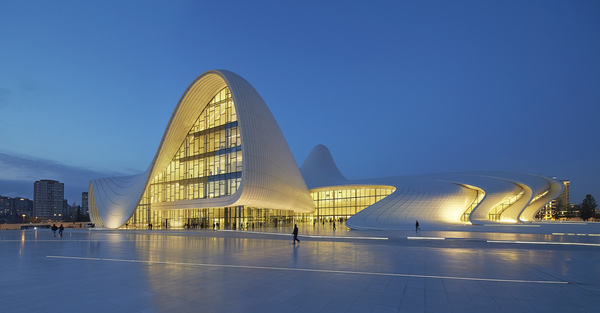 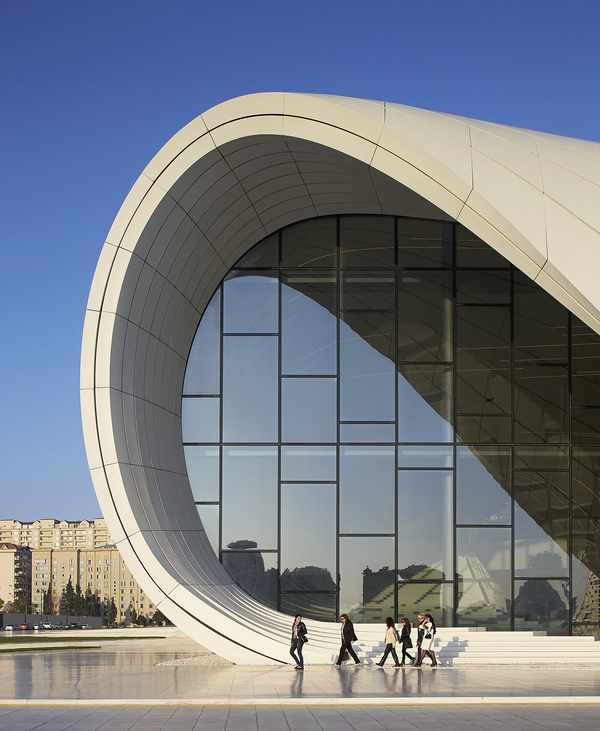 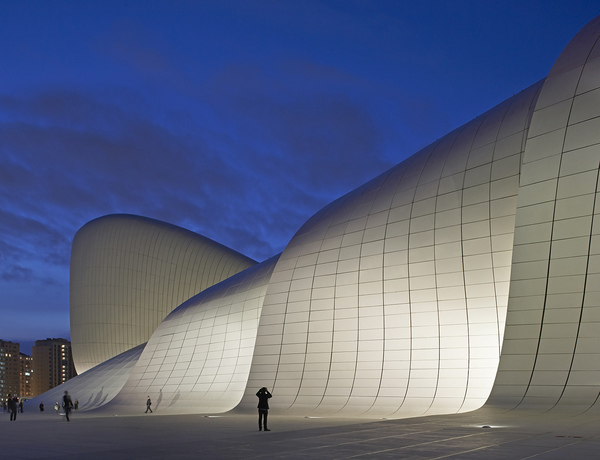 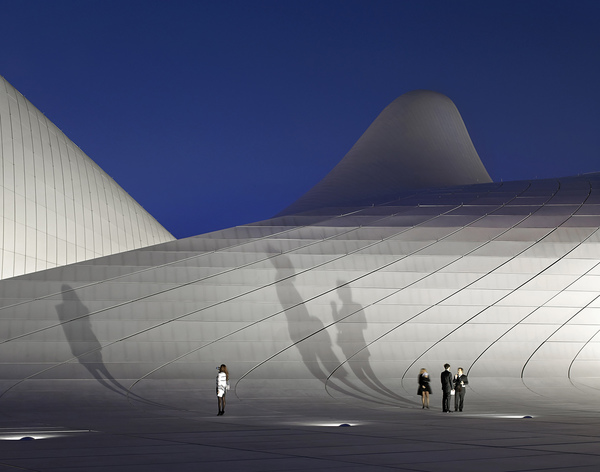 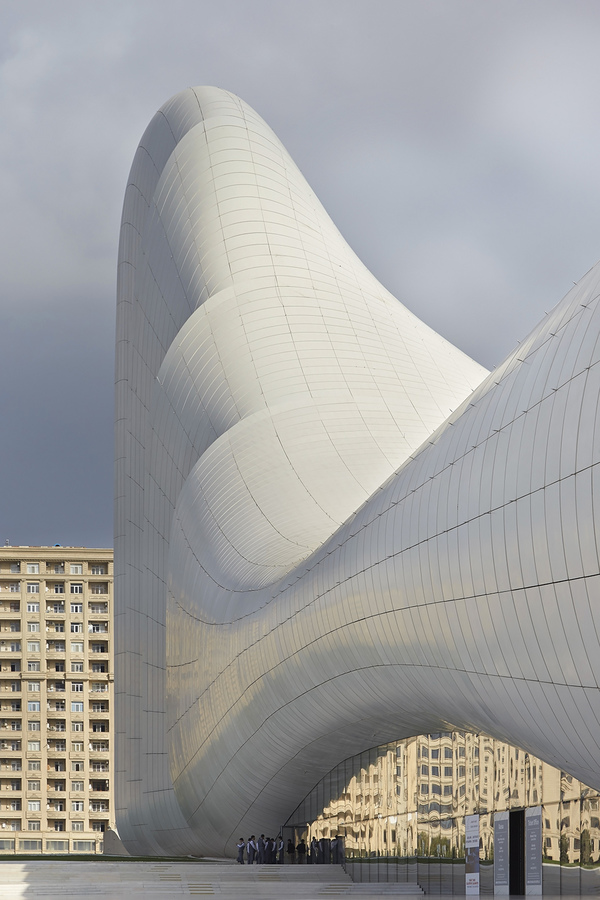 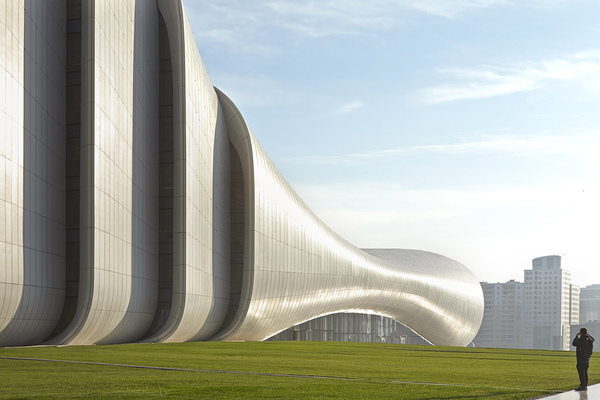 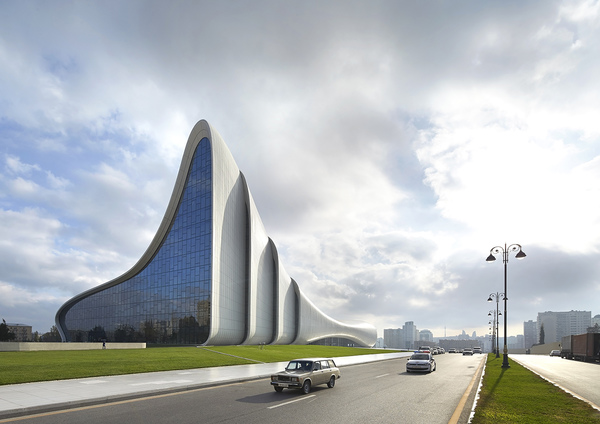 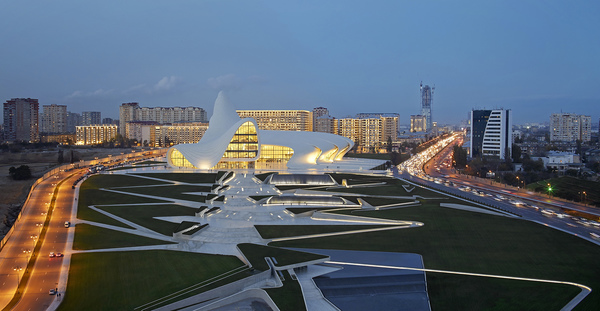 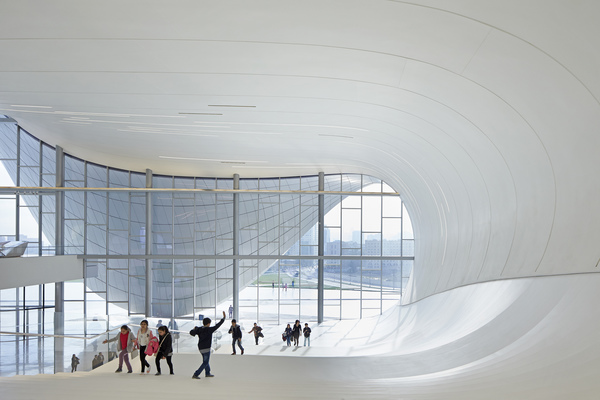 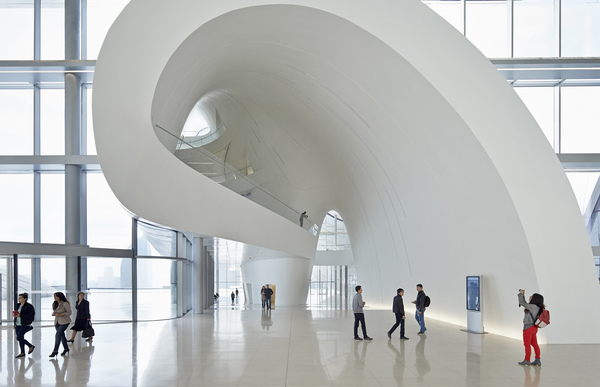 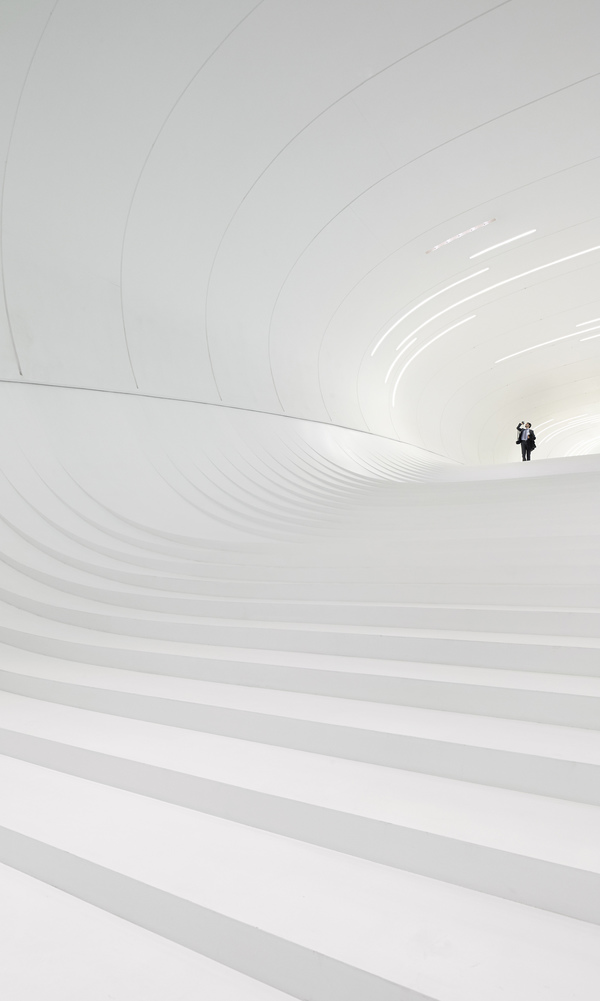 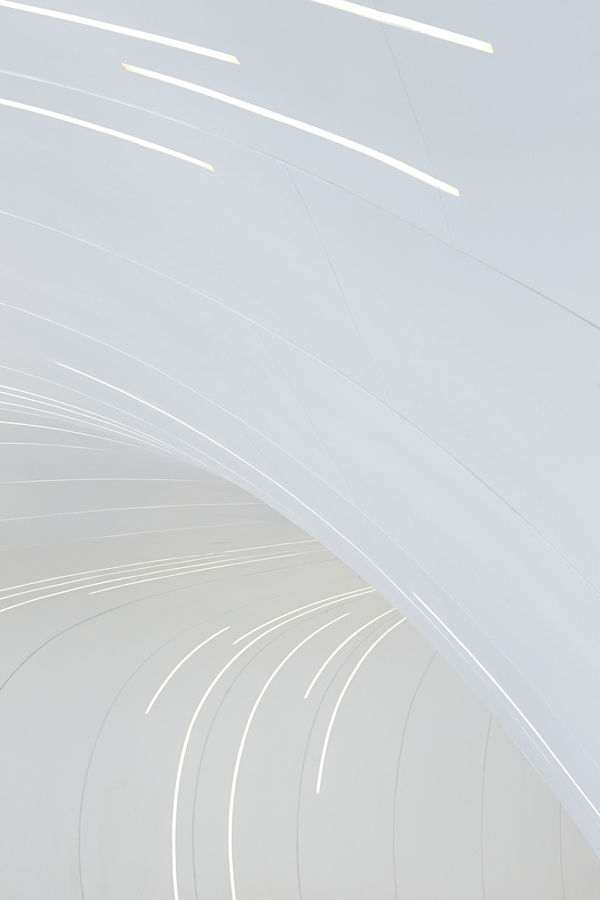 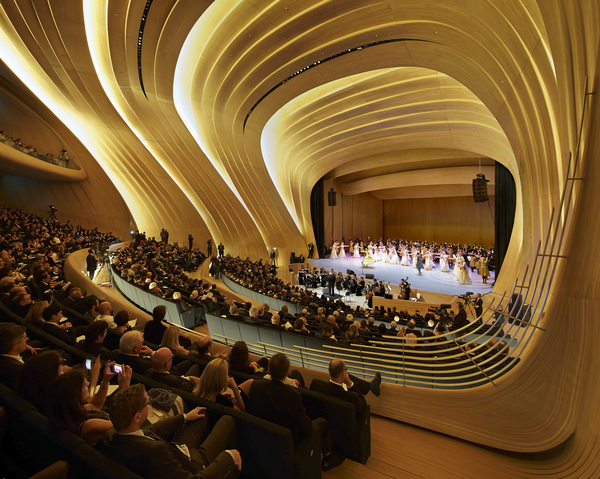 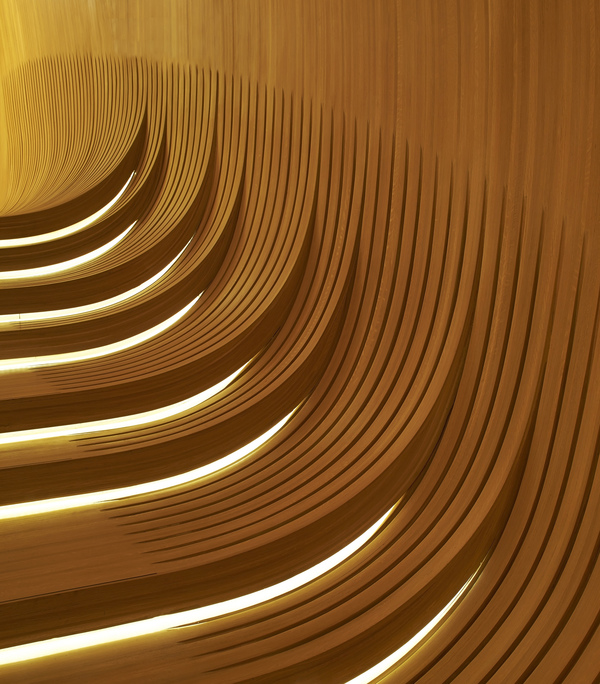 Special thanks to Charles Walker

Client: The Republic of Azerbaijan