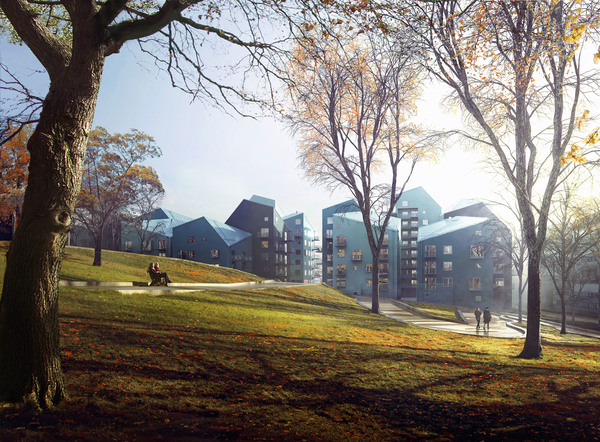 Six shapes of blue in Hallonbergen

On behalf of Wåhlin Fastigheter, Utopia Arkitekter have developed a densification proposal for rental apartments in Hallonbergen, Sundbyberg, north of Stockholm. The six new buildings with a total of 170 apartment units will be a contemporary and playful addition that clearly breaks from the large scale uniformity of the area's older developments. The new buildings will instead be characterised by a small scale in which the broken-up volumes with varying heights and slanted roofs create interesting and intimate spaces as a valuable complement to the large urbanity that dominates Hallonbergen today.

The new development in the Vandraren area will fill a gap in the long north-facing facade that runs along the Rissneleden road and that illustrates Hallonbergen from the north. By developing the open areas on each side of the Hallonbergsvägen, the new development will support both the Rissneleden and the Kraftledningsgatan without needing to conform to the long horizontal rows that currently define the area.

The characteristic roofs will be clad with sheet metal. The buildings will have clear and well-glazed entrances on the ground floors facing both the street and courtyard, in order to create a vibrant, secure and comfortable base.

Six new apartment buildings in two areas are proposed on the east and west sides of Hallonbergen. The sites will consist of three buildings each placed round an open courtyard. The buildings correlate to the existing structure of Hallonbergen, but possess a richer variation in terms of relative positioning, volume and colour. The new buildings have a clear vertical character set against the horizontal lengths of the area.

The buildings are mutually offset and their heights vary between four to ten storeys. The gaps between the buildings provide contact with the courtyards and the green space to the south, while creating lines of site through the areas. Height and placement of a building is designed with respect to the natural light in new and existing buildings. The developments will turn their backs to the north and noise of the motorways.

The area expansion means that the lift and pedestrian tunnels under Hallonbergsvägen and Rissneleden, respectively, are removed. Instead, pedestrians and bicycles will be integrated with motor traffic on the same level, which will provide a sense of increased urbanity and security.

The buildings are lower to the south and Kraftledningsgatan to maximise natural light to the courtyards. The courtyards are marked by stairs and walls that connect the buildings, as well as low vegetation that allows the larger solitary trees to dominate. The courtyards will feel semi-private, clearly belonging to the residents, but still be open as a shortcut for curious visitors.

The development's character of interlinked volumes, in pairs and threes, is enhanced by every volume being its own "indiviidual" with its own roof of crystalline shape. Together with the various heights, the roof designs create a roofscape that is constantly shifting depending on natural light and viewing angle.

Complementary facilities such as roofless bicycle parking and rubbish chutes to subterranean containers are considerately placed and designed as an integral part of the outdoor environment. 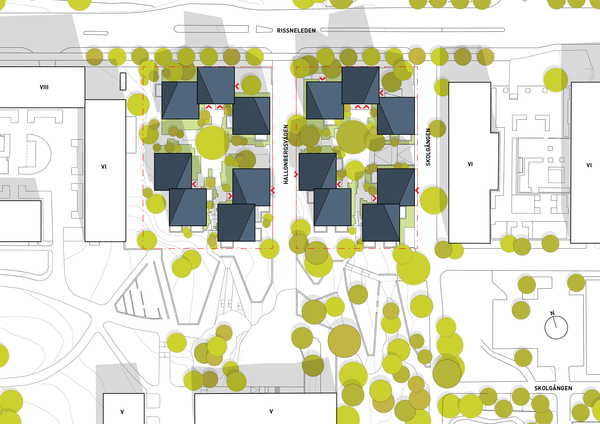 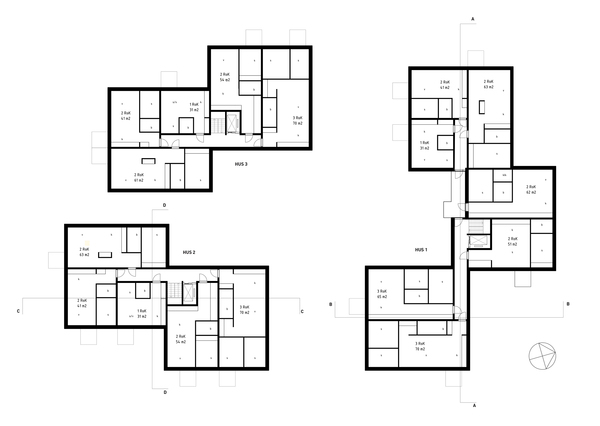 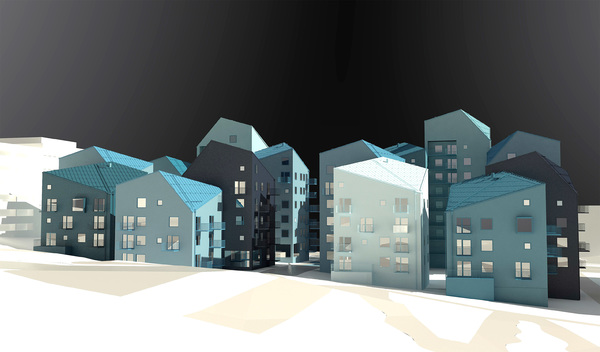