Hans Christian Andersen’s work was diverse and highly creative. A crucial source of inspiration came from the paper cuts which he created in attendance of an audience while he invented a story. The story would come to a conclusion just as Andersen unfolded his paper-cut revealing the subtle figures and patterns.
The very first paper-cut from Andersen’s hand was included in the first issue of “Eventyr” from 1850. On this paper-cut Andersen writes “… It is an entire cut out fairytale”.
“Fairy-Trails” uses this very first paper-cut - Andersen’s source of inspiration - as the organizing structure for a magical garden in which visitors can immerse themselves in the world of H. C. Andersen to understand, reinterpret and create new fairytales. 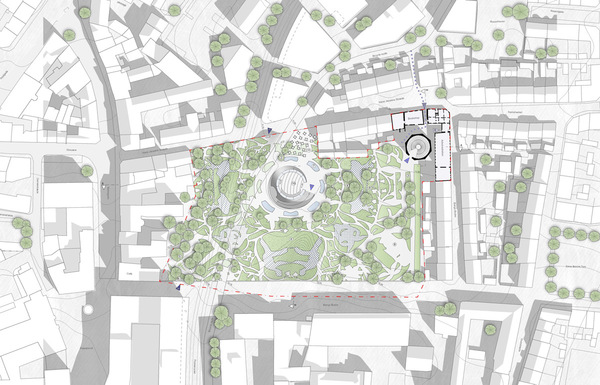 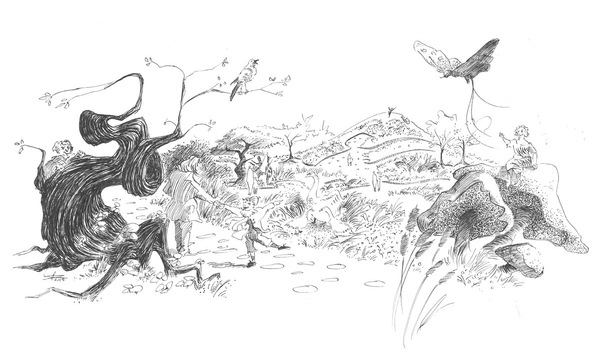 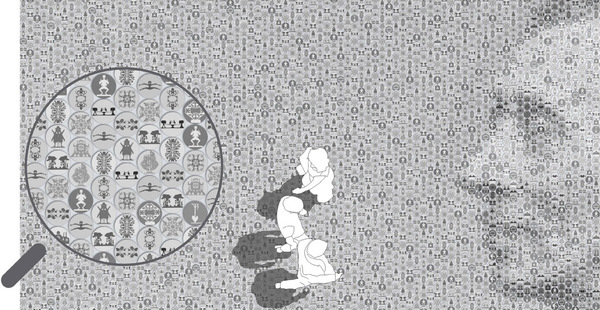 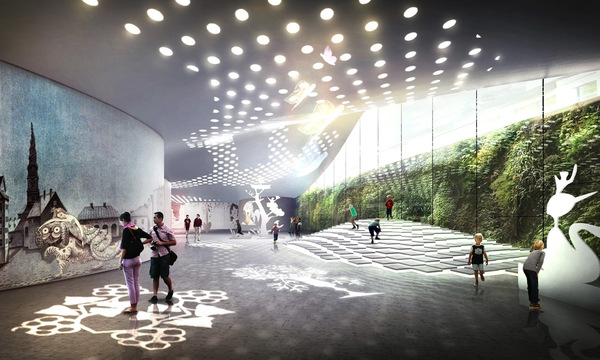 The House of Fairytales is not a house; it is much more the absence of a house, a magical garden, a green public carpet in the middle of the city.
The entire block is placed on a magical carpet. The carpet undulates and opens on the edge to allow daylight and access to the rooms below. The garden is the central starting point for visits and it augments the urban experience and folds into the House of Fairytales.
Inside the garden the visitor is completely immersed in the fairy tale world. Characters and objects from Andersen’s most popular stories are revived as sculptures or live actors and the play of scale is consolidated in the landscape design with its unusual scale of large grasses and reed as well as small but timeworn apple and cherry trees.
The paper-cut is the primary structure of the garden. It defines pavement and greenery.
The public accessible zone is continued below ground where it is connected to the planned underground garage.
All exhibition spaces are located below the magical garden. The visitor can descend through a spiraling stair around the “Hollow Tree” which serves as a café.Another option for connecting the garden and the exhibition would be to extend the Tower of Remembrance downwards with a spiraling stair. This would completely leave the tower in its original appearance but add a vital functional element to it from which it would benefit.
The birthplace of Hans Christian Andersen is an iconic building. It is delicately located on the corner of a block were the cobbled road makes a slight kink. The birthplace should be reinstated as the most important original building of the complex. We propose to liberate the house from the surrounding buildings and reestablish it as a house in its own rights. Furthermore visitors can enter the Garden directly from the cobbled Hans Jensens Stræde through a gap in the building row immediately next to Andersen’s birthplace.

Fairy-Tiles
For the hard paving a unique Hans Christian
Andersen “Fairy-Tile” with 30 different paper cuts as motives were created.
These Fairy-Tiles can be placed to create calm monochrome surface or – due to their difference in tone – create large scale mosaic images on the surface.

Reality Transformed - between fantasy and reality.
Hans Christian Andersen was able to maintain a long life of creativity and storytelling by elegantly combining the familiarity of real human experiences with the transformation of reality into fairytales, using his imagination and creative artwork. In this sense, one of the strengths of the fairytales of Hans Christian Andersen was that they relied a great deal on real human experiences.
The House of Fairytales has a unique mission; to allow for visitors to create new fairytales and stories based on the legacy of Hans Christian Andersen. The foundation of this mission relies on children’s play, and in particular the importance of imaginative play as a starting point for a lifelong creative engagement as an adult.
Children and families of tomorrow urgently need this inspiration. They need it, not only to learn from the past, but to be able to produce a new culture of digital literacy, which is still founded on the captivating reality of human experiences and psychology.
It is precisely imagination and human creativity that makes the House of Fairytales orientated towards the future, paving the way for the future of literacy.
The foundation of this creativity and storytelling comes from human play. Imaginative play, creative play and storytelling is particular important because it is an act of interpretation. It is based on an innate urge to make sense of the world, motivated by personal experiences and supported by social relationships. And through imaginative play our private worlds are made public, and we contribute to shared knowledge and understandings.
We believe this is the essence of a House of Fairytales; a place for children and families to exercise the relationship between fantasy and reality. These relationships make us human and make us construct the understanding of our time and produce a new culture of storytelling.

Exhibition Concept
The exhibition concept is based on the notion of a House of Fairytales, which can transform real human experience; a place where visitors are part of producing stories by combining new technologies with conventional methods of storyboarding and crafting. The exhibition concept is arranged around four central themes: Inspire, Create, Share and Reflect.
Inspire
The purpose of the inspiration area is to spark curiosity inside a ‘thea-trical’ space of natural and organic elements designed by folding down the magical carpet into the underground area. Inspiration comes from personal human experiences and passions, when exploring the figures and stories of the magical garden. Visitors gather stories and inspiration from the fairytales in the garden, capture these inspirations on small storyboards and makes sense of them in the context of everyday culture.

Create
The create area is a huge workshop space with plateaus and niches, where one can make use of hands-on materials and creative software to design stories. New software allow for the merging of hands-on paper-cuts and characters into stop-motion movies and new media productions.
A critical difference for the visitors is that the new digital technologies allow for a combined physical and digital literacy, where one can experiment with new set-ups, shifting identities and crossing boundaries.

Share
The area of sharing is where the real transformation happens. The best way to consolidate knowledge is to reveal the inner meaning of ones work and to describe the outcome in a simple communicated form. This is where the stories are generalized and presented in a ‘studio’ fashion, which builds on top of an existing community of Andersen’s fairytales.

Reflect
The area of reflection relies on the rich installations of the H. C. Andersen archives. A series of tableaus are used for changing exhibitions where you can get a glimpse into the wonders of the Andersen archives based on central themes from his career. Artists and narrative writers are invited to interpret the fairytales of Hans Christian Andersen, and to describe their own creative processes as inspiration and reflection for the visitors.